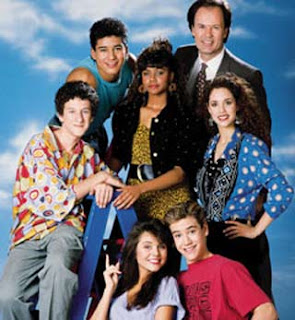 Yup, it's finally here. The post many of you have been waiting for since I started my "Everything I ever learned" series 8 months ago. This post has been festering in my head like a zit on Craterface Coburn. Since I did not have any Beldicil handy, I figured I would type up the post on my plane ride to Iowa and back from Kansas City. I hope you enjoy it.

*Editor's Note* Before you start writing nasty comments, let's set a few things straight. This Saved by the Bell post includes story lines from Good Morning Ms Bliss despite the fact it was set in Ohio at JFK Junior High. It was packaged with SBTB and had episodes introduced by Zack. The trip to Hawii and the Jessie's Dad's wedding are also included. The College Years did not happen. They just didn't. The SBTB Wedding in Vegas is in the canon. The New Class did not happen. Nope, not at all. Let’s get started.
Ms. Bliss
I had a hard time picking out one episode to show her greatness. There is the awesome episode where she pranked herself and framed Screech to teach the kids about the legal system that really sticks out to me.  She engaged her students in a way they, and I, would remember for years. I do a mock trial to this date because of how cool that entire episode was to me. Having kids learn by doing is so important and Ms. Bliss did this with many of her lessons. She even brought technology into the classroom for one very funny episode.
Miss Bliss really wanted to teach the kids about the stock market and decided to use something called the Internet in class to have students buy and sell stocks. Zack came up with a crazy get rich quick scheme and purchased a whole bunch of stocks on margin and then the stocks tanked. While I do not recommend that teachers allow students access to their e-trade accounts, it was so cool to see a teacher using a computer in the classroom and actually allowing the kids to use it for real world learning. Real world application is something all teachers should try to keep in mind as lessons are planned. If a student can see how the skill can be used, maybe they will be more engaged.
Miss Bliss was a hard worker that always pushed her principal, Mr. Belding, to accept the different ways she would use to teach the class. She was progressive and passionate. She cared about all of her students and strived to help all of them be who they were. I like to think that I have a little bit of Miss Bliss in me and that makes me feel good. (Note: I do not suggest dating a student's parent like she did with Zack's Dad. That would just be weird.)
Principal Richard "The Big Bopper" Belding
"Woa woa woa, what’s going on here?" The calling card of a person who seemed to never know what really was going on in his school. Mr. Belding is probably not the best example of a principal at first glance, but he really does some things that are worth noting. In his dealings with Ms. Bliss, he supported her crazy ideas because he knew that she got results. Her methods were different, but her success at getting Zack and the gang to learn important Social Studies concepts was never in question. That trust in a teacher as an expert in their field is important. That type of support is something many teachers do not feel. As schools and districts move more toward cookie cutter testing, teachers are not encouraged to try new and different things. "Teach to the Test" seems to be the mantra for many admins across the country. Supporting different ideas from veteran teachers should be encouraged, but also monitored. Mr. Belding did a good job of doing both. Well, after his initial freak out.
I realize that it was easy for Belding to be involved in the day to day activities of his students because the school population was just over 38 kids, but it should not be ignored. Mr. Belding worked hard to be there when the students were doing something interesting or exciting. He was an active participant in the school's events. Whether it is a Ski Trip (The one Zack could not go to because of his grades and he got the waiter from The Maxx to play his Dad and Belding and he only really wanted his Dad's attention.) or a White Water Rafting Trip (Which was supposed to be chaperoned by Mr. Belding's brother Rod, but he bailed to hook up with some flight attendant named Inga. Also, the brothers Belding had the names of Dick and Rod. Just sayin'.). Anyway, Mr. Belding was always there for the kids and he loved his school. It is too easy for some principals to hide in their office and only see the ones who need punishment. Belding was a visible principal that was involved in the every day activites of the students and staff. He might not have alway gotten along with Mr. Tuttle, but he let the teachers do what they thought was best.
Mr. Tuttle


Mr. Tuttle was a jack-of-all-trades. He taught Glee Club, driver's training and business class. Mr. Tuttle was also the head of the teacher union at Bayside. He had a great sense of humor and interacted well with the kids. Despite his failed aspirations to become principal of Bayside High School, he worked hard to provide a fun learning environment. He was actualy one of the few teachers that liked Zack despite his crazy schemes. He supported the quiet Violet Bickerstaff when she showed the rest of Glee that she had an amazing voice. He was a very kind and funny teacher.
The thing that I liked about Mr. Tuttle is that he was always willing to work with what he had. That Glee club was terrible, but he gave the kids the best experience possible. As teachers, we often do not get the dream class. We get a collection of students with varied skills. We must always be committed to doing our best to reach as many students as possible. I'm not sure if I would use a golf cart in the school for drivers training, but then again, I'm no Mr. Tuttle.
Terrible Testaverde