"Ghost in the Wires" by Kevin Mitnick

A review of Ghost in the Wires: My Adventures as the World's Most Wanted Hacker by Kevin Mitnick 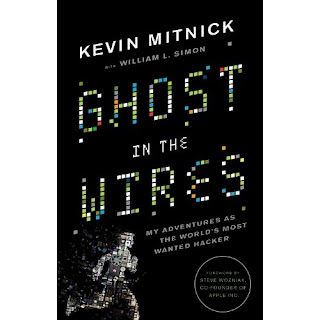 It might not come as much of a surprise to you, but I'm a bit of a nerd when it comes to technology. I'm always curious about the new gadgets that are coming out and I want to explore what makes them tick and how I can use them at home or in the classroom. Kevin Mitnick was the same way growing up, but he travelled down a different path to what he would call, "Darkside Hacking".

I was able to read Mitnick's new book, "Ghost in the Wires", which chronicles his adventures as "the world's most famous (former) hacker". His story, told with help from William L. Simon, starts with his early beginnings with phone lines in Middle School and his interests in computers and coding. As a teacher, there were some very interesting parts of Mitnick's life that really stood out to me.

I always wonder what drives a person to do the things they do. Does a person commit a crime because they are angry at someone? Do they break the law because they are motivated by money? Mitnick seemed to enjoy hacking because it was a challenge. He was passionate about phones, code and computers and wanted to see what he could and could not do. His very first scam involved forging bus transfers so he could ride the busses around Southern California during the summer while his mom worked. While riding around the bus routes, he met interesting people that turned him on to Ham radios. By his early teens, he received his FCC license to use a Ham radio. Mitnick would go on to use that Ham radio to make free phone calls. He was a gifted young man that I might have loved to have in class. Sadly, many of his actual teachers did not feel the same way.

Mitnick says he was a good student but was always criticized for being disruptive. Looking at what he ended up accomplishing, it is no wonder he was disruptive. The traditional classroom was not the right place for Mitnick and his skills. When he was placed in a computer class, usually reserved for upper class-man with more credits, he quickly realized he knew more than the teacher. At one point, Mitnick frustrates the teacher so much, the teacher throws a telephone across the room! The traditional classroom was not the place for Mitnick and he soon realized it.

Mitnick would continue his hacking lifestyle as he grew older. He would play with phone lines and even create an account using the name "James Bond" and a number that ended with "007". He just kept going back for more to see if he could. However, he would get caught, his mom would get upset and he would promise never to do it again. It was a cycle he would continue for much of his life until he was finally caught and imprisoned long-term.

I loved the story telling in this book. Mitnick does an excellent job re-telling the events of his life in a way that is fun and entertaining. There are times that the coding language that is used can be complex, but he always brings it back to the story. There is also a snarky tone when he writes about the authorities and their attempts to catch him. The underlining part of this book is that Mitnick was just looking for a challenge. He did these things to see if he could. It is no different than a kid on a basketball court seeing how far he can move away from the basket and still make it. Mitnick did the same, but he was able to make his shots from outside the stadium!
I enjoyed reading "Ghost in the Wires". I think that Kevin Mitnick does an excellent job of sharing his crazy adventures in the world of hacking. Even if you are not a lover of all thing technology related, this book will provide many interesting stories you will want to share with your friends.

Ghost in the Wires: My Adventures as the World's Most Wanted Hacker is available August 15, 2011 and I highly encourage you to go out and pick up this book by the world's greatest (former) hacker. You will not be disappointed. If you don't, he just might disconnect your cell phone for the fun of it. :-)

Posted by Nick Provenzano at 6:40 PM