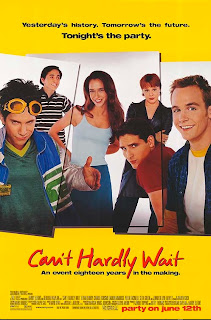 I have started and stopped this post multiple times. I just felt I couldn't tell the story I wanted to no matter how many different times I wrote the post. Finally, I figured out what the movie meant and here is my take.

Preston finds out his long time crush, Amanda, is finally single after being dumped by her long-time boyfriend Mike Dexter. Mike broke up with Amanda the night before graduation because he was expecting to hook up with all of the college girls. Preston spends the entire night of graduation waiting for the right moment to tell Amanda that fate has brought them together. Wackiness ensues and Preston attempts to connect with his true love.

Mike Dexter is the symbol of all would be education reformers. He isn't happy with his current girlfriend and his willing to risk it all for a potential windfall in college. There isn't anything wrong with wanting to change girlfriends. Assuming that everything is better than what you currently have is the wrong way to go about it.

Some current ed-reformers are doing the same thing. They are throwing everything away in the hope of improving education as a whole later on even thought there is little to no support for making their decisions. In fact, there is ton of information that shows otherwise.

Near the end of the movie, Mike talks to Trip McNeely. Trip is a college Freshman and was the coolest kid in high school last year. Trip is a shell of the kid he was in high school and lets Mike know that College is not what it is cracked up to be and that he should hold onto Amanda. Trip regrets dumping his girlfriend and wishes she would take him back.

I feel this is what is going on in education. There are many people out there trashing teachers in the name of reform. They have ideas regarding merit pay and assessment based evaluations. Even though there is no track record for success, they are moving forward anyway. In the long run, these people are going to end up like Trip McNeely. They are going to realize the huge mistakes they made and will come back to teachers asking for help. By then, the damage will be done. Mike tries to go back to Amanda at the end of the movie and she rejects him in front of the entire party and Mike is exposed as the fraud he is. This is something I see happening if the Mike Dexter's of the education world do not change their attitude.

Preston is a bit of a sad case. He has pined over a girl his entire life and is only saying something on the very last day of high school. Now, he ends up with the girl because she realized his intentions are pure and he is a really good guy. I think teachers are Preston, but I want to encourage everyone to stop waiting.

Teachers need to speak up now. We cannot wait until the last day and hope that what we really want finally happens. The movie needed a happy ending, but in reality, Amanda doesn't end up with Preston before he jumps on a train out of town. If teachers do not speak up, we will be alone at the train station wondering what might have been.

Use blogs, Twitter, Facebook and any other way you are comfortable to speak up for education. You do not have to be a teacher, principal or involved in education in any way. If you care about students and the education they are receiving, speak up now before it is too late.

Lastly, I want to talk about Kenny Fisher. Kenny Fisher is played by Seth Green and he is the funniest character in the movie. Kenny spends most of the movie trying to lose his virginity by pretending to be someone he is not. It isn't until he starts to act like himself that he finally gets lucky.

Kenny can teach all of us a valuable lesson about being yourself. Too many teachers try to be someone else in the classroom because they think that is the way it is supposed to be done. Being yourself is something we tell students all of the time. Why should teachers be any different. The moment I started to be me in the classroom was the moment I felt comfortable in class. Find yourself and be that person. The students will love it and your life will be much easier.

"Can't Hardly Wait" is a movie for my generation. It is filled with great music and wonderfully 90's fashion. I see the connections to education is this movie because the current state of education is in such upheaval. Important changes have been made that are going to hurt our students and it is important for all educators to speak up. I hope you enjoyed this movie post and I promise I will work on the another in the future.

Posted by Nick Provenzano at 9:06 AM