Last week, I was out a couple of days for the MACUL conference and I was challenged by my principal to make sure that learning still takes place while I am out. I am always up for a challenge, so I spent a couple of weeks trying to think of the best way to make sure my students get the most out of the class time while I was out.

I've used bulletin boards, message boards, and other similar tools with students in the past, but I have never had students have a discussion in class using these tools while I was gone. They have always been used for after school work. My idea was to have a silent class discussion. I'm not sure if others have used this term before or if I made it up, but it was an interesting concept. What if students could engage in a full discussion on a topic using iPads and their own personal devices.

I wanted students to discuss 4 Emily Dickinson poems. The focus on the poems must start with the learning objective they chose at the start of class (Post coming soon), but then they may go off into other areas if they wanted. I created 4 videos that I recorded by using Google Hangouts On Air. I basically invited myself and recorded me reading Emily Dickinson poems while sharing my screen that displayed the poems.

I uploaded each video as a new announcement with the directions.

The students have 49 minute class periods and that would be plenty of time to ready the poems and comment. I sent a Remind text to them in the morning to remind them to bring headphones. I wanted students to listen to the poems and then comment. I also gave them some areas to consider when discussing the poem. What happened next, blew my mind.

I really had no idea what was going to happen with the class discussion. I hoped there would be a nice dialogue about the poem and the students would share a few ideas and move on to the next poem. The picture above shows that there were 55 comments on the first post. I have a class of 31 in that hour. When I went through the post, I was happy to see that everyone had a comment and others had multiple. I was actually able to join the conversation during the opening keynote (Sorry George!) and it was great. 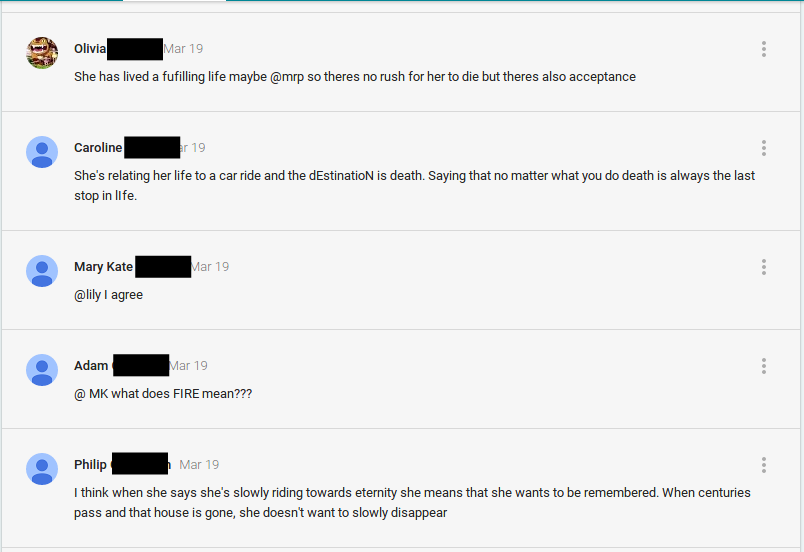 Olivia, who was an absolute rock star while I was gone, responded to my comment earlier in the post and it was as if I was in the class. The posts were filled with such great comments and everyone bounced back and forth with their thoughts on the different poems presented to them. There was a point where I wondered if I was holding students back in class when I'm in the room. Was I holding students back in class? Am I too involved in class discussion?

Another thing that was cool to watch unfold without any suggestion from me was how the students communicated and responded to one another. To make sure everyone knew who they were responding to, the students used @ and the student's name. It would be great if Classroom allowed users to tag others like you can in Facebook, but this method started by the students worked very well. I followed their lead and communicated to students that way when I responded to their questions. These were comments for the first question. I figured things would wind down near the end of class as students wrapped up the discussion. I was way wrong.

The exact time stamps are now gone, but Mary Kate was responding to a previous comment asking about her thoughts on what fire represents. The thing with Mary Kate's last comment is that it took place 20 minutes after my class ended. She was in her next period responding to a comment that was left on 5 minutes before hers. That means the other student was commenting in their next hour. It was amazing! (I do not condone students doing my work in other classes, but it was pretty awesome to see how engaged their were in the discussion.) The conversation was so engaging that students felt the need to finish their thoughts and it did not matter that they were no longer in my class.

The other thing that stands out about this 4th question is the fact that there were over 80 comments on the 4th question. When students might have decided to slow down as the end of class approached, they provided the most feedback on this poem than any of the others. Students were quoting lines from the poem, using facts from websites, and even providing varying definitions to words to support their points. It was so great to see the kids invested in the discussion.

This worked out in the best way possible. The next time I am out of the classroom, I will be using this. I'm annoyed I have not used this earlier in the year. There are still some major steps that Google needs to take with Classroom before it can become an integrated part of my class every day, but this experiment showed me a way to get the most out of it for now.