Tech Made My Days Easier 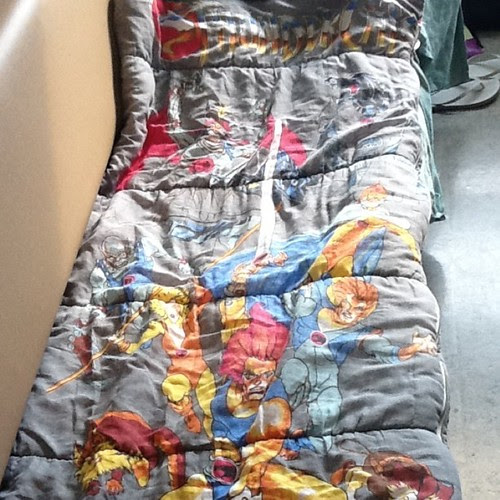 My bed for the past couple of days.

This is my first post as a Daddy and it feels pretty good. I wanted to talk about how awesome it has been to have my iPad2 and iPhone4 during this whole process.

The live tweeting of the labor was a fun way to pass the time as everything progressed. I made sure to ask the wife and only did it when I could not be doing anything else. I received a ton of positive feedback and equally silly responses from those that were following #BabyProWatch2011. @BabyProvenzano was even able to get Chris Pratt (@prattprattpratt) from NBC's Parks and Rec to send @JenniferPro a tweet of encouragement! Twitter helped spread the information of the birth of my son faster than making individual phone calls.

The camera on my phone and iPad made spreading images of the most beautiful baby boy in the world very easy. Using Instagram, I was able to post pictures to Facebook, Twitter and Flickr. Sharing information quickly is key and I was able to show the world Baby Leo in an instant. The hospital's robust wifi definitely makes all of these things much easier. Also, my wife couldn't come down to the nursery, so I was able to share all of the cute pictures and video with her. That really made her smile and feel better.

As I visited Leo in the nursery, it was nice to have the iPhone to take pictures, but it was nicer tin have it to play him music. I played "Let it Be" by the Beatles for him while I fed him. It was that or "Closer" by NIN. JK. It was just a very cool moment of Dad, baby and good songs. A lasting memory for sure.

I've also been able to deal with school emails when they pop up. I will not have to worry about a crazy inbox when I return. Students have been good at avoiding silly emails. I was able to clear unnecessary emails as they arrive. It will save me tons of time when I get back.

Lastly, my Freshmen have been a bit goofy since I left. It's as if their collective IQ drops off a cliff the minute I leave. They had forgotten all of the basic essay steps I taught them and I was emailing constantly with my sub. This morning, I received an email from the sub asking for clarification on the assignments. She understood it, but the students had questions. I was ready to grab my iPad and start a Skyoe session while wife and baby napped. Sadly, the lab my students were working in is not set up with a webcam. This is a problem that will be addressed when I get back. Instead, I grabbed my phone, looked up the library lab phone number and had the sub put me on speaker. Whle talking, I pulled up the research paper assignment sheet from Dropbox and walked the kids through the assignment again. I took questions and put out fires from the comfort of the waiting room.

When I bought the devices, I never thought about how handy they wouldnbe while caring for my wife and newborn at the hospital. These pieces of tech made it possible to make connection to friends and strangers. I think that's what makes tech so great! The possibilities are endless when you can reach out and share with everyone whenever you want. Tech can be about making connections. I will never forget that fact.


Posted by Nick Provenzano at 9:35 AM