Everything I learned about education, I learned from Goonies 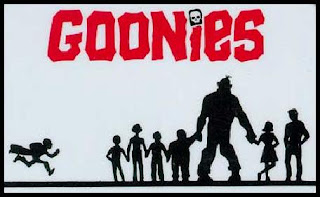 It has been too long since I have written a movie post. I’ve been tossing the idea around for a little while and Goonies has always been a favorite of mine. I plan to tackle “Can’t Hardly Wait” shortly afterward, but wanted to get my thoughts on Goonies down first. I will also be doing a Zombie post as well, but I’m not sure if I can wait until October.

This Goonies post was the brain child of a couple of nerds who wanted to write about an awesome movie. Josh Stumpenhorst and I loved the movie and wanted to share our thoughts with all of you. Please check out his Goonies post on his blog, Stump The Teacher.

Let's get going!
Rosalita: [in Spanish; subtitled] My God, I'm in a crazy house!
Rosalita was such a funny minor character in the movie. She is taken on the tour of the house my Mrs. Walsh and Mouth was used as a translator. I could easily talk about the importance of a solid Spanish program at Astoria High, but Mouth shows that he has a great handle of the Spanish language and chooses to use it in more mischievous ways.
I think the important part of this scene is why Rosalitia is even there. Mrs. Walsh wants the house clean from top to bottom before they clean it up. It begs the question from the audience, “What’s the point?” The house is going to be torn down, so why bother? I feel that many people view education the same way.
Many people have the attitude that the system is fine the way it is. If it’s broken, it’s too broken to fix. If it’s fine, leave it alone. Mrs. Walsh was not satisfied with “just leaving it alone.” It was her house and she wanted it to look its best even as the wrecking balls approached.
As educators, school is “our house” and we should strive to make it the best it has ever been at all times. Even when things seem like a mess, that is when we need to dig down deep and make it the best place for students to be until the very end. Although Mrs. Walsh might have seemed silly to care so much about a house about to be torn down, educators could learn a valuable lesson about dedication to a job well done.
Andy: Watch this.
[Data's father takes a camera out of his jacket and proceeds to take a picture but the film falls out. Andy starts laughing]
Andy: He's just like his father.
Data: [in Chinese] That's okay daddy. You can't hug a photograph.
Mr. Wang: [in Chinese] You are my greatest invention.
Data was the man. The actor, Jonathan Ke Quan, also played Short Round in The Temple of Doom, was two awesome movies in the 80’s. Data was the tech geek of the group. He was always thinking up crazy inventions. His Slick Shoes and Pinchers of Peril saved the Goonies when they needed it most. Now, he had trouble telling the difference between a candlestick and a stick of dynamite, but that has happened to all of us.

When Data is hanging just above some pointy spikes, thanks to the Pinchers of Power, he comments that everyone has always made fun of his inventions. I think this is the most relevant to education today. I work with teachers that have snickered and giggled at my various uses of technology. They have done so for years. When people where still using overheads, I was asking for projectors. I took the giggles in stride knowing that these tools were going to come in handy one day.

Data never gave up his passion for innovation. His loving Dad fostered data’s love for innovation. Administrators need to foster this same type of innovation in the teachers in their building. With a strong support system, anybody can do anything. If you are a teacher in a building without the support, keep pushing. You never know when your “Pinchers of Peril” will save the day.


Francis Fratelli: Tell us everything! Everything!

Chunk: Everything. OK! I'll talk! In third grade, I cheated on my history exam. In fourth grade, I stole my uncle Max's toupee and I glued it on my face when I was Moses in my Hebrew School play. In fifth grade, I knocked my sister Edie down the stairs and I blamed it on the dog... When my mom sent me to the summer camp for fat kids and then they served lunch I got nuts and I pigged out and they kicked me out... But the worst thing I ever done - I mixed a pot of fake puke at home and then I went to this movie theater, hid the puke in my jacket, climbed up to the balcony and then, t-t-then, I made a noise like this: hua-hua-hua-huaaaaaaa - and then I dumped it over the side, all over the people in the audience. And then, this was horrible, all the people started getting sick and throwing up all over each other. I never felt so bad in my entire life.

This is one of my favorite scenes in the movie. Chunk is at his finest when telling this story. Whenever I think about this movie, I think of this scene. Comedy gold!
What does it have to do with education? Everything! If you eliminate the crazy circumstances, we have a kid that just wants to be listened to. He is known in the group for telling outrages lies. Whether it was Michael Jackson coming over to his house, or eating is weight in Godfather’s pizza or telling the police that little green men where terrorizing Astoria during Christmas, Chunk always had a story to tell. Why does he lie?
Kids often lie for two reasons. They lie to avoid trouble and they lie to get attention. Chunk needed some attention and his lies where ways to connect to people. This scene reminds me of, from an education standpoint, is that educators need to spend more time listening to kids instead of talking at them. I know I’m guilty of this from time to time. When I see this scene, I remember that I need to just listen sometimes and I will really hear what they want to say.
Sloth: Hey you guys!
Communication folks! When was the last time you shared something with another teacher you thought was awesome? Any of us do awesome things and we are afraid to share them with each other or others in our own building. We should not be afraid to openly communicate the things we are doing with other teachers.
It is also ok to come swinging in and save the day like Sloth did on the Pirate Ship. Sometimes it is ok to be “that” teacher. I have had to learn to become comfortable being the “go-to” guy for tech stuff in my building and district. It has lead to many great opportunities for myself and other teachers. The next time you want to share something with others, just title your email, “Hey you guys!”
Andy: I can't tell... if it's an "A sharp" or if it's a "B flat"!
Mikey: Heh, if you hit the wrong note, we'll all "B flat!"
Andy: I hit the wrong note. I'm not Liberace you know!
I think that too many of us get down on ourselves for not being perfect. I tend to stress out over things that did not go perfect. It’s ok to aspire to having the perfect lesson plan, but it is not ok to freak out when it doesn’t go exactly as planned. Andy was trying to play the right notes and everyone’s life was at stake, but with the support of her friends, she came through in the end.
Educators need to look to their peers more often for support when things do not go as planned. Find out what went wrong and fix it for next time. The perfect lesson plan does not exist. Everything needs to be tweaked from year to year because the kids change from year to year.
We tell kids to learn from their mistakes and try harder next time. Educators need to take that same advice when working on class materials. As long as we are dedicated to improving every time we try something, everything will work out in the long run. I will never claim to be the Liberace of education. Those who do, are the voices that should be taken with a grain of salt.
Mikey: See! That's what I said! You always contradict me... I know what I was saying. It was on the history of Astoria and these are the rejects!
Chunk: Kinda like us... Mikey. The Goonies.
Being a teacher these past few months has really made me feel like a Goonie. Outside my friends and family, there seems like little support for teachers. The Goonies should be a source of inspiration though.
Educators could easily give in to the pressure of big business and let them take everything educators have worked hard for, but, like the Goonies, we can fight back. Teachers are getting up every day and fighting the good fight for the kids. If the history of this nation has taught us anything, it’s that the “rejects” always have their day. The Goonies, mostly through back-story, were not treated with much respect and had to work hard for everything they needed. As educators, we need to keep fighting for what is best for the students and us. At the end of the day, we might just find that bag of jewels to save the day.
Mikey: Don't you realize? The next time you see sky, it'll be over another town. The next time you take a test, it'll be in some other school. Our parents, they want the best of stuff for us. But right now, they got to do what's right for them. Because it's their time. Their time! Up there! Down here, it's our time. It's our time down here. That's all over the second we ride up Troy's bucket.
Mikey: Goonies never say die!
The Goonie spirit is something that every person, educator, student, everyone, should cherish. The never say die attitude is something that I live by in my professional life. I get frustrated and want to quit, but gut it out. I expect my students to work through problems and I need to as well.
The Goonie spirit is something that all people should have in them. Times are tough around the country and world right now. Many schools could give up and let charters take over. Many teachers could give up and find jobs where they will not be criticized. However, I see the Goonie spirit in these educators because they will never give up. As a teacher, I know that I will never say die.
Thanks to IMDB.com for providing the exact quotes I needed.

Check out Stump the Teacher for his thoughts on The Goonies in our classroom.

Posted by Nick Provenzano at 5:21 PM