Playful Ways to Help Students Transition from Tablets to Laptops

Today’s students grow up with smartphones and tablets in their hands. By the time they get to school, they’re comfortable using these devices on a daily basis, so it makes sense to meet them where they are and use touchscreen computers in the classroom, too. In a blog post called 10 Benefits of Tablets in the Classroom, Scott Winstead celebrates the advantages of tablets, but also points out some of their limitations, especially for older elementary school students.

As he writes: “Tablets do not support multitasking, so several files or windows might be a challenge to lesson integrity….Not to mention the trivial fact that tablets run on batteries, and batteries tend to run out of charge at the least appropriate moment.” He also mentions the non-trivial fact that tablets can be more expensive than Chromebooks.

To give their students the best of both worlds, many schools provide tablets for their youngest learners and Chromebooks for the older ones. This progression of devices is logical: many states require older elementary-age students to use devices with keyboards for assessments. Also, according to at least a couple of studies, when used properly, laptops can have a positive effect on students’ attention and learning. 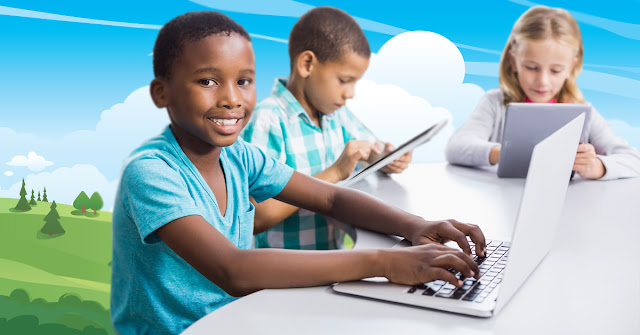 Making the Leap to the Laptop

The tricky part is the transition from one device to another. Using a finger to touch an icon is very different than typing on a full-sized keyboard.  It was crazy watching Leo encounter a full computer for the first time because he just assumed the screen was a touchscreen. He looked at the keyboard as if he recognized it from the iPad, but thought it was weird that it just wasn’t on the computer. I started working with him on using a mouse and keyboard in Kindergarten because the state tests he had to take are online and he needed to be comfortable navigating a computer using a mouse and keyboard. I can be annoyed all I want that students in Kindergarten are taking these tests, but I still need to prepare him so he doesn’t get frustrated and anxious about the test. It is not a tough task to start exposing young children to typing. It can actually be fun AND educational.

One way to help kids make the leap is to have them use their touchscreen skills to gradually learn the layout of the keyboard. Games like the ones from TypeTastic, which can be played with a mouse or with a single finger, teach kids as young as kindergarten to recognize letters and remember their positions on the keyboard. With a cast of characters that features brightly colored frogs and bugs and cupcakes, games like these fall firmly into the category of “teaching through fun.”

Moving from one device to another can be a challenge for both students and teachers, but with a little playful planning, it can go smoothly.

This is a sponsored post, but that doesn't mean I don't believe that students need to start exploring typing at a young age so they can be comfortable exploring the digital world as they go through life.
Posted by The Nerdy Teacher at 10:13 AM