This is another entry on my coverage of the Adobe Education Exchange contest. You can read more about the contest and how to participate here. I wanted to share with you the type of lessons that people are submitting to the exchange when they enter the contest. Take a look at this awesome lesson from Tom R. Chambers that uses Google Earth and its flight simulator and Photoshop to motivate students to study history and geography.

Here is one example he gives using the Nile River:

"It is considered to be the longest river in the world, and it's associated with irrigation by the Egyptians as far back as 4000BC. The source of the Nile and its life-giving floods was a mystery for centuries. Ptolemy held that the source was the "Mountains of the Moon," and the search for these and for the origin of the Nile attracted much attention in the 18th and 19th centuries. And of course, Cleopatra and her people were associated with the river.

Take the above facts/situations, and build a lesson plan around them by having the students explore the Nile River via Google Earth and the flight simulator to get a sense of how long the river is. Actually have them fly at a low altitude to follow the bends and twists of the river. As they fly, they can hit the space bar to pause the flight to take notes, perhaps, on what else they see." 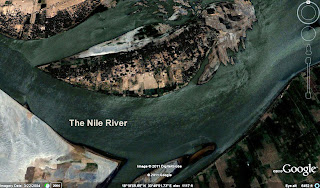 You can find another example of using Google Map's flight simulator with Photoshop by checking out his lesson.  If you like what he has done, don't forget to leave a comment and rate it using the stars like I did.

Full Disclosure: Adobe is a sponsor of The Nerdy Teacher.