Connected in a Crisis #DigCit #DigCitSummit

The other day, my school had a lockdown. It started during the last few minutes of the school day, so it seemed odd for it to be a drill. Standard procedure has the teacher shut and lock the door, pull the shade, and move students out of possible view of the door. Students are to remain quiet and stay off their phones. It turned out that this was not a drill. A student claimed to have had gun in their backpack.

Thankfully, the student did not have a weapon. While we were locked down, I was keeping students quiet and had to keep telling them to put their phones away. We do this to prevent students from sharing information on social media that could possibly aid an assailant and to prevent wild rumors from going around that could cause other problems. Rumors spread anyway.

When the lockdown was called off, a student of mine proclaimed he knew what happened. He said someone had been stabbed across the street at a local market, the assailant ran into the school, and they had a gun. I told him this was ridiculous and that he should not have been on his phone. The principal cam on the PA and explained what had happened shortly after the lockdown was called off because rumors had gotten out of hand in the brief 20 minute window. How wild? Local news stations were reporting the false information as fact. Take a look at this article. 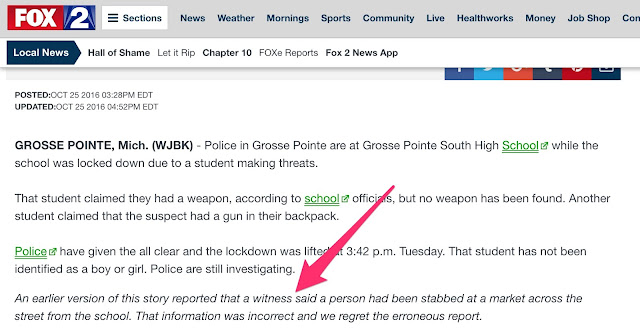 A student started a random rumor on social media because they thought it would be funny and it was reported as fact. Less than 20 minutes and the message had spread throughout the community. Parents were scared. They needed to find out if it had been their child stabbed. The police had to check to see if this were true or not. Time and energy was wasted on this wild goose chase while a potentially serious situation was unfolding in the building. This is why Digital Citizenship needs to be stressed.

I took the first part of every class I taught the next day to explain the seriousness of these false tweets and posts. Explaining to the students that misinformation in a crisis could lead to loss of life really shook some of them. The look on some of their faces told me they had never even thought about it.

We want to be connected during a crisis to let our loved ones know that we are safe. That is one thing, but spreading rumors is another. This was a terrible situation that needed to be used as a teachable moment. Posts have consequences and a crisis is not the time for jokes or rumors.

I hope teachers will take this story and share it with your classes if/when you talk about Digital Citizenship. Our posts have power. We must remind our students and remember this ourselves.

Posted by The Nerdy Teacher at 7:31 PM