This little robot packs quite the programming and hardware punch. You might not think that by just looking at it, but it really does. The Coder MiP has the following features that are worth noting.

Beaconsense - This allows the robot to know its surroundings and the situations it is in.

Gesturesense - It can sense movement in front of its eyes.

Sound Detection - Coder MiP can be activated by the clap of your hands if you want.

Gyroscope and Accelerometer - It stands up right on its wheels and can be given directions on how fast to go.

I was not sure how the Coder MiP was going to balance itself on those two wheels, but once it was connected to my iPad via Bluetooth, it stood straight up without an issues.

Coding the Coder MiP might sound like a hassle or a tough task, but it is a simple block coding system that is similar to Scratch. Leo, having had used Scratch in the past, simply starting moving the blocks around on the screen to get Coder MiP to do what he wanted. There is also a free drive mode, but Leo really preferred to code the robot to see what he could make it do. Here is a video of Leo using the Coder MiP.

He had so much fun trying to figure out all of the different things he could make the Coder MiP do. There are plenty of different sounds that the Coder MiP can be instructed to perform and the movements allow for 360 turns and pauses between actions. It is a very simple system for young students interested in robotics. Leo learned about the cause and effect relationship of actions placed in code. Having it try to do a spin before coming to a complete stop caused it to fall over. Adding the pause button would allow it to make the turn the way he wanted. It was fun watching him figure it out on his own. 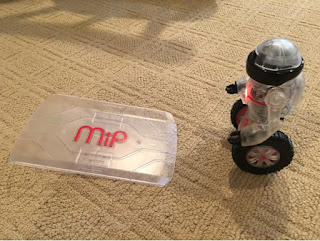 The Coder MiP comes with a ramp and a serving dish which can be fun as kids learn to program and complete tasks using the Coder MiP and these extra tools.


The Coder MiP charges using a micro USB and you can get a little over an hour with constant use after a full charge. The app shows you the battery level and is free to download. 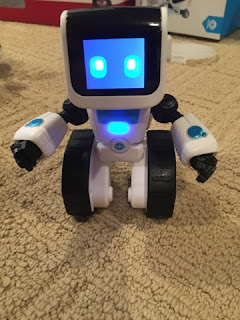 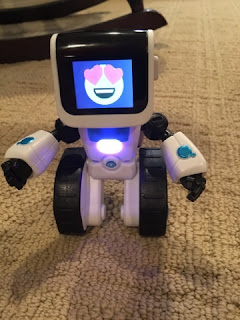 If you think that your students or children are not ready to dive into block coding, then Codji is a great place to start. Codji works on using emoticons (Emojis) to send instructions and elicit reactions from the robot. The app has many different features that Leo very much enjoyed plating with during the day. 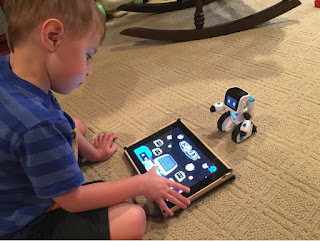 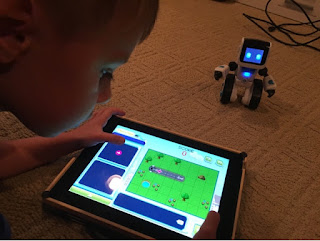 In the picture above, Leo is guiding Codji through a street. This is level one and Leo just needed to move him over two spaces. Leo had to count the spaces and select the right arrow twice to move the robot on the screen. As the levels increase, the paths become more difficult and require adding turns and movement in other directions. Leo liked trying to solve the maze each time. 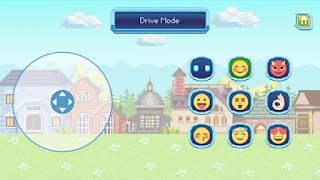 Here is a screen shot of the driver mode. You can take Codji out for a spin and have emojis show up on his screen/face. Leo loved to use the Devil emoji and have another emjoi stick his tongue out at me. 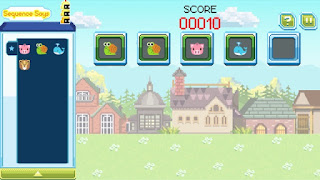 This part of the app required Leo to watch Codji's face for an image and repeat the sequence on the app. This was easy at first, but it does get difficult the further along you play. It was a nice challenge for Leo to think about the Sequence of things and how to remember them.

The Codji runs on three AAA batteries and works best on a flat hard surface. Our carpet was ok, but the traction on hard floors is much better.

I think both of these robots from WowWee make a fun addition to any home or classroom looking to introduce students to a very simplified version of robotics. These are they types of toys that can really spark an interest in students and have them excited to follow a more in-depth path to robotics down the line.


WowWee did send these robots to me for the purpose of a review, but that does not make them any less awesome to me or to Leo.