The Nerdy Robot with @EZ_Robot #MakerEd

At the start of the 4th Quarter, my students wanted to do something different in our tech class. They suggested building a robot. I thought this would be cool, but I had no idea where to start. Lucky for me, I attended ASCDs annual conference and met the amazing folks at EZ Robot. I was shown a demonstration of their JD Robot and I was hooked. Here is a quick video from them that shows what JD can do.

The cool thing about the robots is that they are modular. The parts slide into place and can be replaced with other parts as needed. You really get the feel of building a robot because you need to assemble it out of the box! Watching the students gather around in groups and assemble their robots was such a fun experience. They spent a couple of days looking at the different parts and seeing how everything went together and how they might possibly tweak the robot to meet their needs. It was not long before the robots where up and running and the kids were programming their very own robots.

EZ Robot comes with its own software to program their robots. The full software is available on PC only right now, but they do have light versions for the Apple and Android Mobile Devices that work very well. Most of my work with the robots has been done on the iPhone and iPad because it is so easy to set up a quick script to make my robot rock out. Their software also comes with a Scratch based system that allows for easy drag and drop programming for beginners. It really is a strong programming system for all ages and skill levels. Here is an example of what you can do with the software.

Printed a Microphone and ran some code. My @ez_robot loved it.
A video posted by Nicholas Provenzano (@thenerdyteacher) on Jun 4, 2016 at 2:40pm PDT


Another awesome part of EZ Robot is that designs for the various plastic parts are available as files on their site. You can download and 3D print pieces as needed. This was huge for me after a trip this past week. My EZ Robot, which was protectively wrapped when I packed it and later manhandled by airport luggage workers ended up breaking both arm joints of my robot. 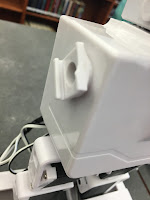 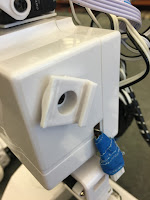 I was able to download the files at the conference, set them up for printing, and then print as soon as I got home. Here is TNT (The Nerdy Teacher) with his new arm parts. 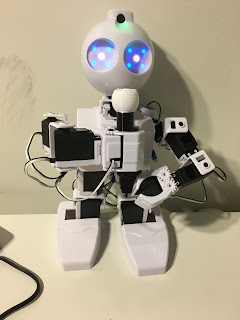 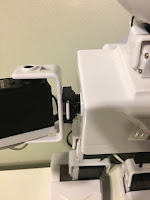 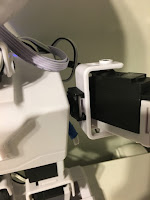 My EZ Robot was back in action and looking good. I designed the microphone as well. I can have him sing and dance as much as I want!

The best use of the robots in class was having students design a maze for the other groups and then program their robot to make it through the maze. It was a very fun lesson that challenged the students to think about the different parts of the maze and how their robot would interact with it.


Students have been given routes designed by other students. They need to code their @ez_robot through the route. #Makerspace #makered
A photo posted by Nicholas Provenzano (@thenerdyteacher) on May 19, 2016 at 6:06am PDT


Here is a video of students figuring out how to get their robot to track a color.

Students figured out how to get their @ez_robot to track the color red. #makerEd
A video posted by Nicholas Provenzano (@thenerdyteacher) on May 3, 2016 at 6:18am PDT

I love all of the possibilities of having a robot to play with at home and in the classroom. It is cool to learn how to code and possibly design parts for the EZ Robot. I think my guy needs his very own bowtie. Check out EZ Robot and their educational package that could take your Makerspace to the next level.

Thank you and good night! #makered
A video posted by Nicholas Provenzano (@thenerdyteacher) on Jun 4, 2016 at 2:42pm PDT