I've been having some fun with the littleBits Arduino Kit the past couple of days. I've had some experience using Arduino for smaller projects, but I had never used it with littleBits before. I wasn't sure how this would all go together, but I'm pretty pumped with what I was able to come up with after I got the hang of the code.

The first project I wanted to create was a random number generator to select students in class. The concept was pretty straightforward, but I could not get the code working. 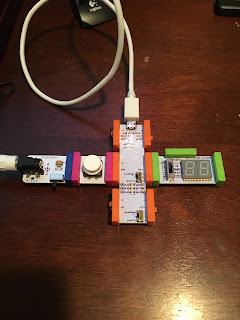 With this setup, I wanted to click the button and have the code run and give me a random number. It makes sense in my head, but it did not make sense to the bits. The button placed here controlled the power. A quick push only gave a quick dose of power. My project was never going to work. I had to make one simple switch to solve this problem. 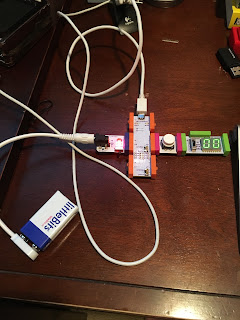 It was not my code, it was the button. Ugh. Now I can press the button and have a random number appear on the number bit. The number bit is not part of the standard Arduino Kit from littlebits, so you would need to get this bit from another kit or purchase it separate. You can find the entire project on the littleBits site.

My next project uses only the bits in the Arduino Kit and I think it is a fun way to show whether or not you are in the office or if a kid has left the room with a pass. 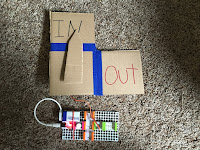 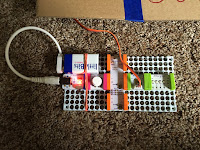 The code for this one was very simple. It was just using the Button Code found on littleBits. The servo turned on its own and the light is powered by the button. You can find the entire project here.

It has been nice to sit down and start making with something fun. It has been a crazy few weeks where I have travelled and talked to other educators about the importance of Making, but I have not had much time to make. Sitting down and working on these two projects caused a little stress, but I was filled with such happiness when I figured them out and could share them with others.

I hope others will get out there and make some fun things with littleBits or anything you can get your hands on.