It's All About The Community. #MakerEd #Making

I was very lucky to work with some awesome people at ISTE2016. So many crazy things happened, it is impossible to shine a light big enough to cover them all. So, I want to write about something that really inspired me and made me excited about the future.

Making has become a bigger part of my educational life the past couple of years. I have been diving into Raspberry Pi, Arduino, Python, etc. As an English teacher, it has been a trippy journey. I never thought I'd write a book about Making or Makerspaces, but I have one ready to go in September. I mention this because I never could have done any of this without the support of the Maker community. I'm not talking about the Educational Maker community. They are awesome and I love them too, but they are part of the larger Maker community. They are dedicated people that want to make things and help people make things. In other areas of life, there can be a "this is mine" or "do it yourself" mentality, but that is not what you tend to see in the Maker community. I have had so many questions about how to do things and every Maker forums I've been to have been filled with support. It is awesome to be embraced for the Nerdy things you are doing. At ISTE, it was taken to another level.

I've been following rockstar education Makers for some time, but felt like I could not match their awesome level of Maker knowledge. I was able to meet these amazing people and realized that I am not even close to possessing a fraction of their knowledge. That's ok though because they were more than happy to share what they knew and I know I can go to them if I have questions or ideas. The community is crazy strong and it extends to those companies that "get it" when it comes to Making in education.

I have been a total fanboy over Ayah Bdeir after watching a video of her conversation at SXSWEDU. and her TED Talk. She is an amazing and passionate person trying to take littleBits into every classroom so all students can feel like inventors and creators. I was lucky enough to run into her at the littleBits booth and talk for a minute. She was awesome and I shared that on Twitter. Her response floored me. #NerdHeaven 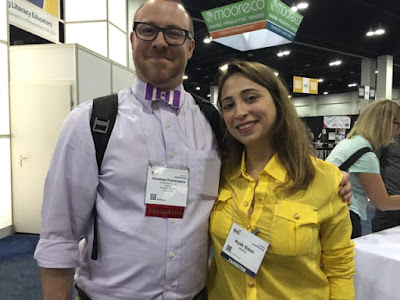 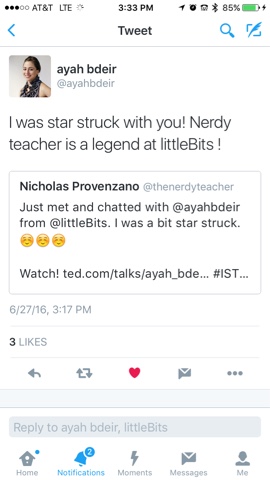 This really cool moment was just one example of meeting someone in the Maker community and having them quickly embrace what you are doing and they want to know how they can help. Ayah was awesome, but I also want to say that the entire littleBits team was awesome. I just love seeing people that are passionate about what they do and just full of smiles even when they are exhausted from hours on the showroom floor. Check them out to see what I'm talking about.

I also had the pleasure of getting to meet Collen Graves, Diana Rendina, Jeff Branson in person. These are three all star Makers who rocked it at the Maker Competition. I had never met them personally, but I had followed their work. Watching these three Masters at Making go to work was awesome. It was so interesting to watch thinkers think like I think. I learned just from watching them and they were eager to share with anyone that came to their table. That is the beauty of Making and these three amazing Makers are examples of what the best of Making looks like. Check them out! I do not want to leave our my friends Bill Selak and David Saunders. I've known them for a few years now and we have met multiple times. Their contribution was amazing to the event as Master Makers. They are great people and amazing friends.

I want to encourage everyone out there that is thinking about Making or starting Makerspaces to reach out to the community. They are awesome and passionate people just like you that want to see more people Making. Get out of your comfort zone and get Making!
Posted by The Nerdy Teacher at 1:00 PM