The QR Quest - A Prototype

Below you are going to read about a Prototype that started with an idea to engage learners and bring the classroom out of the classroom. This came about after a 2 day boot camp were educators and designers learned about Design Thinking. I will get around to a post on DT, but I wanted to share this idea with everyone because I'm excited about it.

This is all very rough, but I like the direction it is heading. These are two examples I put together on how I might use QR codes in the classroom in conjunction with a local park and a local museum. I would love to hear your comments. I've know about QR Codes for a while but The Daring Librarian is the bomb when it comes to them.

These lessons assume that the students would have access to a class set of iPads. Any tablet would work for these ideas. I use iPads because that is the tablet I'm familiar with. Anyway, here are the lessons.


The QR Quest in the Language Arts Classroom

Here is an example of what the QR Quest could look like in the Language Arts Classroom. This example is based on the American Literature Class for Sophomores.

Students would read American Folk lore and learn the meaning behind these stride and their value in society.

Students would go to the Henry Ford House to see the Fantasy, Folklore and Fairy Tales exhibit. 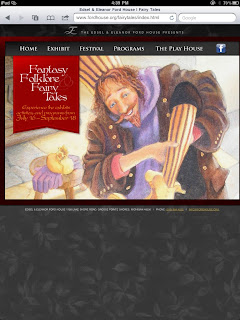 Students would look at the art on display and create their own stories based on the art they find.

The students would spend the next few days creating their own stories based on the picture alone. The iPads allow them to create videos, photo collages, songs, poems, etc.

Students would then post their creations to a digital space and create QR codes to share with the Henry Ford House. These QR codes would be placed next to the art to be scanned by visitors.

A display could be set up at the school that has the QR codes along with reproductions of the art for people in the school to see.

The mobility of the tablets allows the students to create on the go. They are no longer tied to the classroom. The classroom is wherever the student goes with the iPad.

A unit like this could be done in 5 class period or longer depending on the depth of the stories and the length of the student created project.

Here is a project outside of the classroom involving local parks.

After discussing Thoreau's Essay and the concept of Transcendentalism, students would leave the classroom and go to a local park to be inspired by nature the same way Thoreau was when he was at Walden Pond.

Students would bring the class iPads with them to document the sights and sounds of the park.  Like this...


Or they could take a photo and write a poem, 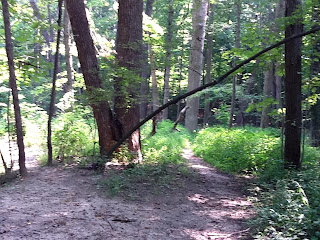 The students can use the apps on their tablets to edit and create whatever they want. Students are now engaged in the material in a way that was not possible. Once students have created their digital inspirations, they will create QR Codes for them.

These QR codes can be laminated and posted along the trails of the park where students were inspired. People would scan these and interact by leaving comments and providing meaningful feedback.

Students would no longer be creating content for the teacher alone, but the community as a whole.

These are just a couple of lessons in language arts, but I could see this being used for social studies, science, art and so many other content areas. Allowing the students to be creative is the best thing we can do as teachers.

I'm working on making this possible in my district for the fall. I have a handful more ideas I could work with using QR codes. Share your ideas so I can share them with my Admins!

Posted by Nick Provenzano at 7:44 PM